The Ontario Science Centre unveiled a special Monarch migration exhibit mural using images from BGOSS co-founder, Kerry Jarvis. According to Jarvis, “the various images reflect the role of people of all ages in Saugeen Shores engaged in monarch tagging.” The exhibit is scheduled to be in place for a few years. 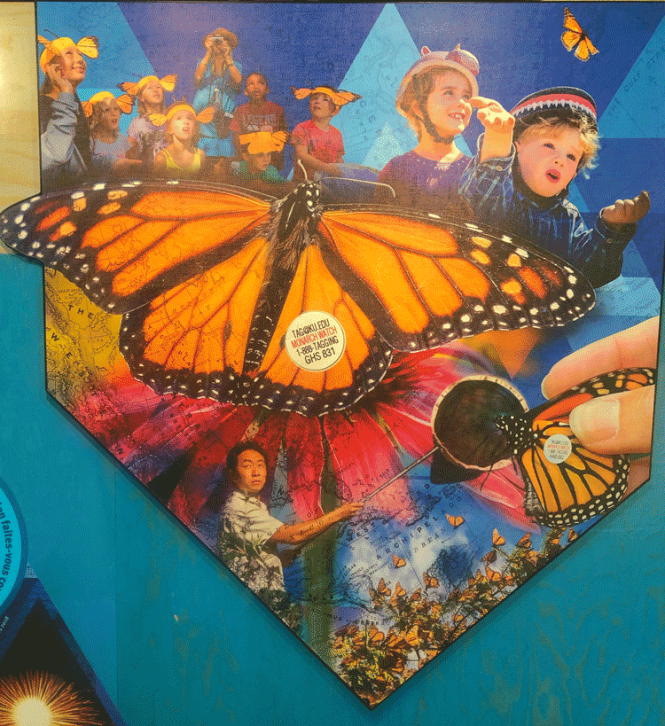 A special thanks to all of our Pod Squad Ambassadors who assisted in this years Monarch tagging. You may have noticed a big change in the tags from last year to this year. Can you spot the differences? 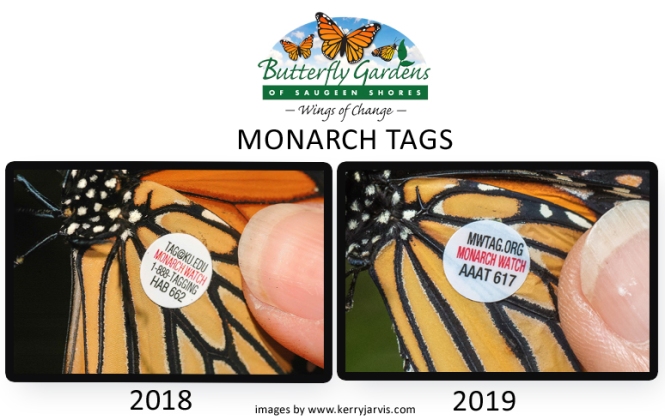 Our community tagging day was covered by the Owen Sound Sun-Times and quotes one of our many out-of-town visitors to Saugeen Shores. 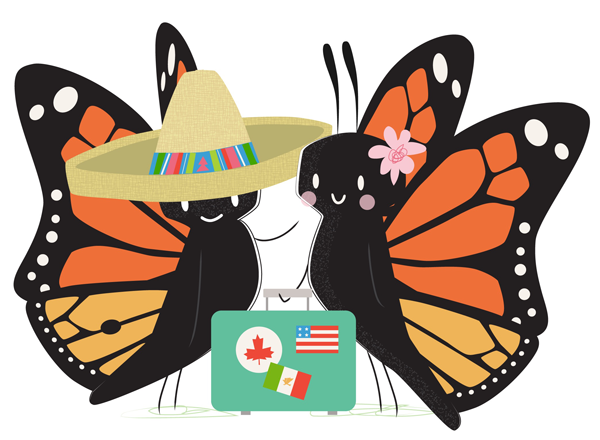 The recovered Monarchs were tagged in late August and early September in Southampton at the Saugeen Golf course, Captain Spence Path, Perkins Park and the Saugeen Rail Trail. “This is quite an unexpected surprise,” says Kerry Jarvis, co-founder of BGOSS. “The odds of having one recovery is rare, but to have 6 in one year is quite exciting, especially when you consider that there are millions of Monarchs over wintering in Mexico.” The recovered monarchs were found in 2 of the major reserves in Mexico: El Rosario, and Cerro Pelon and would have travelled a distance of over 4,500 kilometers. Since it began its Community Tagging Days in 2015, BGOSS has tagged over 1,400 Monarchs and has 9 recoveries.

Now, Butterfly Gardens of Saugeen Shores is eagerly waiting for the return of the great-grand children from the fall migrating Monarchs to grace their presence in our community.

While the ‘Butterfly Gardens of Saugeen Shores’ (BGOSS) is getting ready for the return of the Monarchs, they had some exciting news. They learned that one of their tagged Monarchs was recovered in El Rosario, Mexico.

The Monarch was tagged at the Southampton Golf and Country Club on August 23, 2017 by Stew Nutt and was recovered in Mexico on March 18, 2018. This means that it travelled over 4,500 kilometers. This is a miracle when you think of the size of the butterfly and the fact that it has never been to Mexico before! 208 days elapsed for this female butterfly from the day it was tagged, until the day it was recovered.

This is the second Monarch tag recovery for BGOSS. The first recovery was in 2016. This is quite remarkable as only a limited number of the millions of overwintering Monarchs are tagged. “It is like finding a needle in a hay stack and BGOSS is ecstatic that our community tagging efforts are truly international”, says Melitta Smole, executive member of BGOSS. Tagging Monarchs is one of the most rewarding programs run by Butterfly Gardens of Saugeen Shores (BGOSS). “It provides us with an idea of the numbers of Monarchs in Saugeen Shores and it engages our community with a hands on opportunity to see these lovely butterflies up close,” says Smole.

Over the next few weeks keep your eyes open for the return of the Monarchs to Saugeen Shores. Last year the first recorded Monarch sighting was on May 20. Let BGOSS know when you discover the first Monarch in the area by sending us an email or visiting our web site.

Butterfly Gardens of Saugeen Shores has been alerted to several Monarch roosts in Southampton. Migrating Monarchs will sometimes create roosts in trees where dozens or thousands of them will stay for a day or two. They will typically roost in an area where there is nearby nectaring sources. One roost was documented by cottagers to have about 500 Monarchs! It is really great that residents of Southampton have taken to the Monarchs by planting  milkweed and native nectaring plants. The Monarchs are showing us this year that they really appreciate your efforts. For more information on what plants Monarchs love, check out our special gardening section.
Making a difference really begins with the selection of plants we put in our gardens.

Our third article in a continuing series with the Shoreline Beacon newspaper deals with the spring migration of the overwintering Monarchs in Mexico. The second leg of their unique migratory journey takes them from Mexico to Texas.

Butterfly Gardens of Saugeen Shores has partnered with the Shoreline Beacon newspaper to showcase a series of articles dealing with Monarchs, native planting, migration, and Monarch tagging. Our second article deals with the Monarchs overwintering sites in Mexico. 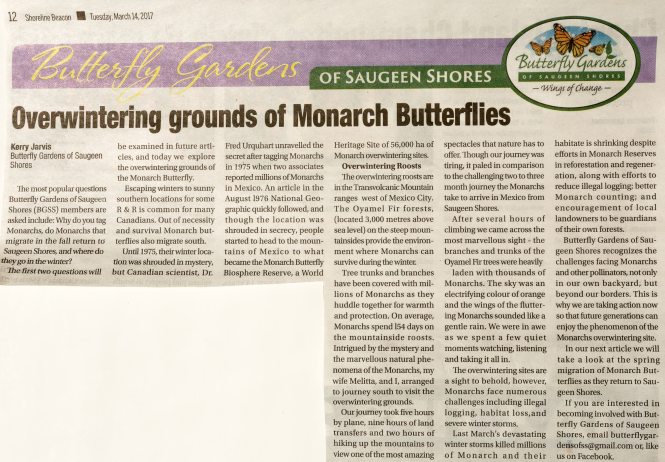